LA Times - On Sunday morning a group of men traveling from Mexico City to Los Angeles were held up temporarily by the Department of Homeland Security as they moved through customs and immigration at Houston’s William P. Hobby Airport.

The problem? An officer found sheet music in their luggage.

“The recent revelation that the Trump Administration is denying visas to unmarried same-sex partners of foreign diplomats and officials and employees of the United Nations is yet another appalling effort to willfully negate the humanity of LGBT people. The Administration, not content with its steady stream of insulting and discriminatory actions against LGBT Americans, now seeks to spread its bigotry to the entire world.

The Fight - Los Angeles Sisters of Perpetual Indulgence urge you to to register and vote on November 6.

This ‘Got To Vote’ photo series came out of frustration with the current state of the country,” the Los Angeles Sisters of Perpetual Indulgence tell THE FIGHT. “The goal is to use imagery and our humor as a tool to encourage our local communities to get out and VOTE! We thought we’d sass it up a bit, for everyone’s enjoyment. As stated by Sister Unity, ‘Sass is serious, it serves and catches the attention of people. It aligns us with those alienated Voters we are trying to convince.’ We drag nuns urge all Americans to register and vote! You want change? You want your voices heard? Then use your right as an American and VOTE your asses off!”

Read more: Got To Vote 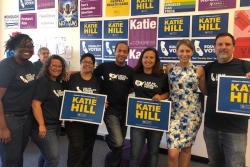 LA Blade - Warning: this is not hyperbole. If the Democrats do not flip the House on Nov. 6, Trump Republicans will control the White House, the US Senate, and the US Supreme Court, with the elevation of controversial nominee Brett Kavanaugh, despite the outcry from a majority of women who think his character makes him unfit to serve for a lifetime on the highest court in the land.

the polls are hard to decipher: bisexual candidate Katie Hill, 31, had a sizable lead over anti-LGBT incumbent Steve Knight in California’s 25th Congressional District to the point that she was a “Lean Democrat” in the Cook Political Report. On Oct. 4, that race was listed as a “Republican Toss Up.”

Los Angeles, CA (September 14, 2018) Significant LGBTQ+ community issues, culture, history and current events are the focus of short videos to be produced by youth and college students in a collaborative blended-learning and video competition program designed to meet the mandates of inclusive education initiatives through the OUR PRIDE Video Fest, a program of award-winning San Diego-based Global SchoolNet.