White Party Palm Springs is just around the corner and I've got some GREAT news for you! UK's most successful (Grammy Nominated) Remixers, The Freemasons are spinning April 10th @ The Main Event Saturday Night! 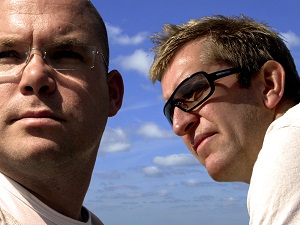 White Party Palm Springs is just around the corner and I’ve got some GREAT news for you! UK’s most successful (Grammy Nominated) Remixers, The Freemasons are spinning April 10th @ The Main Event Saturday Night! The Freemasons consists of producers Russell Small and James Wiltshire and have remixed songs for the biggest names in music! “The Freemasons have such a broad, worldwide following and this is something I have always wanted to have happen.” says White Party Founder/Producer Jeffrey Sanker, “I’m thrilled that finally the “stars were all in alignment” and it worked out with everyone’s schedule. It will be a night to remember!” For up to date information on White Party Palm Springs visit www.jeffreysanker.com

You’re finally spinning in the U.S! What took you so long? We didn’t want to do it by halves... we wanted everything set up right and to find the right people and parties to play for… The US is not the easiest country to get into these days so we also wanted all the immigration paperwork set up perfectly so we'd never have any problems coming across the pond and we're really glad we did it this was as now we're flying... Also the US DJ's play for a lot longer than in Europe so we had to go on some self-made Extensive DJ training courses . Russell's wrist was going limp after 2.5 hours, but now he can keep it up for about 3 weeks
Your upcoming White Party Palm Springs will be your first Southern California appearance. What can they expect when they hear you spin live?
Its always going to be uplifting, vocals are very important to us not just from a DJ perspective, but personally and we've been lucky enough to work on some awesome songs and we buck against the trend of monophonic dance music and play a lot of music. For parties like this we always prepare something special for the crowd, something unique and this will be no exception - Hopefully we'll have something new from us to drop. Our first trip to that part of California, perfect!!
How do you both manage juggling DJ gigs world-wide and growing demand for your remix work?  Do you multi-task while on the road?
We do multitask, technology means that almost anything can be made portable, and it's quiet exciting getting inspired at a gig then knocking ideas up on laptops the day after. We also have started splitting the work quite a bit for European gigs. I (James) do the studio end of things whilst Russell gigs at the weekends. In 2008 we were losing Friday and Monday from the studio and Tuesday was quite frankly questionable at times, but now both ends of the work gets covered... We both always try and play together if possible in the US though - It’s just a fantastic new experience for us.
How did you guys meet?
Through a mutual friend, Jason who was the other half of Russell's precious dance act, “Phats + Small” When I moved to Brighton from London (via Sydney) Russ and I started working on dance stuff almost immediately whilst Jason went off and did his own thing.
You have mixed countless of remixes for high profile names like Whitney Houston, Kylie Minogue and Beyonce. What track was the most fun to remix? Why?
The most fun was probably Whitney Houston’s “Million Dollar Bill” we have a very good friend called Scott who reckons he is the UK's biggest Whitney fan, so the whole atmosphere within our group of chums was excellent during those few weeks of work. Historically I think “Ring the Alarm” by Beyonce was the best to work on - we had the ideas in there very early on and knew they would work, so everyday was not at all stressful, just fun getting the vision finished.
Rumor has is that Techincs will soon discontinue the 1200s.  Any thoughts on that? It's a shame as NOTHING sounds like Vinyl but they have to do it for practical reasons... when they are now only selling a fraction of the units they used to, we just can’t expect them to keep the production line open for sentimental reasons... Also the vinyl cutting lathes are an endangered species and in the UK the pressing plants are nearly all gone - you can't have a record deck with no fresh vinyl to feed it.
You spin all over the world for both gay and straight crowds.  Have you noticed any difference between the two crowds?  Do you tailor your sets differently when spinning for gay boys as opposed to more mainstream crowds?
We can get away with so much more at a gay club in terms of musicality and vocals that we recently realized we are always really excited when playing gay venues, and normally apprehensive when playing straight venues. The one-note underground styles of dance music that come around every few years are here again in Europe and we're never sure how any straight venues are positioned until we get there - we are booked at some of these places because we sell records and can draw a crowd even though we might have to radically alter sets to suit the crowd and hardly play any of our own stuff.

In Gay clubs we are quite simply in our element as the records we make or remix are known and really appreciated and it's a joy to play the things you have worked so hard to get right in the studio to an Audience waving their arms around, also we can play our own stuff back to back in gay clubs and it just feels right. I have never seen a fight in any gay club - I wish the same could be said about the straight boys.

Have you noticed any difference between U.S. vs European or Australian crowds?
Apart from the accent? he he... to be honest, not massively whilst playing. You guys and the Aussies have much better tans and better teeth.
Tell us about your process for when you remix a song. How do you approach it musically to give it your distinctive Freemasons sound?
It actually changes every single time as we always try to work whatever we do around the vocal and song. For example, all our Beyonce mixes are drastically different from a music perspective, but being the same people working on them, they do have a flavor - I guess different dishes in the same restaurant would be a good analogy. We are also always taking some inspiration from the more underground end of music, be it the drums or production techniques, but most of all, we always try to make sure that chord progressions and basic sound of the mix compliment the original song - that’s what takes the time, but is also the most rewarding part.
What’s next for Freemasons?
We're just about to start working on our own new album - we got carried away working with other people last year so it's a long overdue start. We are hoping to link up with some great singers, including the amazing Wynter Gordon from NYC who we met last year and really connected with. Studio has just been updated and we're all set. We're really excited this year, 2010 rocks already!

For more on The Freemasons visit: http://www.freemasonsmusic.net/