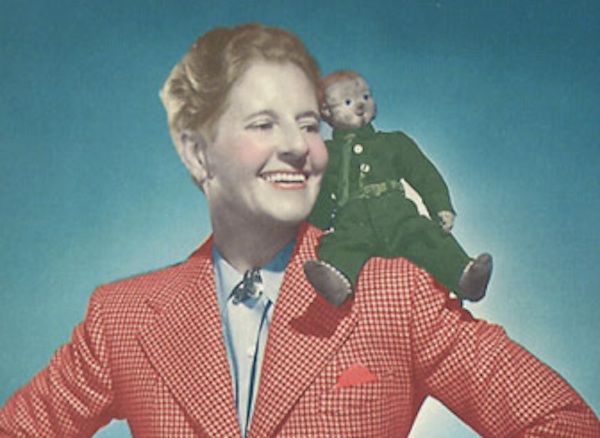 Marion JOE CARSTAIRS died on this date.  There were many fabulous Lesbians in the 20th century, none more fabled than Joe Carstairs. For starters we don't really even know the date of her birth, which was sometime in 1900. That's all the information we have. For all we know she may well have simply sprung fully formed from the wake of a speedboat.  She was born into British aristocracy. That we know. And benefited from the vast capital generated by Standard Oil.


She was rich as Croesus from Standard Oil actually. She usually dressed (in Savile Row bespoke, of course) as a man, had tattooed arms, and loved machines, adventure and speed. And because of her protecting wealth, Carstairs had exactly no fucks to give about pursuing women who interested her. Openly and unapologetically and enthusiastically  Lesbian, she had numerous affairs with women, including Dolly Wilde (Oscar's niece) and a fellow ambulance driver from Dublin with whom she had lived in Paris—and a string of actresses whose names you might recognize, notably Greta Garbo, Tallulah Bankhead and Marlena Dietrich.


During World War I, she served in France with the American Red Cross, driving ambulances. After the war, she served with the Royal Army Service Corps in France, re-burying the war-dead, and in Dublin with the Women's Legion Mechanical Transport Section, which acted as transport for British officers during the Irish War of Independence.


In 1920, with three former colleagues from the Women's Legion Mechanical Transport Section, she started the 'X Garage,' a car-hire and chauffeuring service that featured a women-only staff of drivers and mechanics. Carstairs (and her friends and lovers) lived in a flat above the garage,  which was situated near Cromwell Gardens in London's fashionable South Kensington district.


Several of the X-Garage staff had served as drivers during the war and spoke French, German, or Italian. The cars and drivers could be hired for long-distance trips and the business specialized in taking grieving relatives for visits to war-graves and former battlefields in France and Belgium. They were also hired for journeys within London and the garage had an arrangement with the Savoy Hotel to transport guests to the theatre or shows. During the early 1920s, X-Garage cars were a familiar sight in London's fashionable circles.


In 1925, X-Garage closed and Carstairs inherited the fortune via her mother and grandmother from Standard Oil (she was already wealthy from her father's bequests). She also purchased her first motorboat and was also given a Steiff doll by a girlfriend, Ruth Baldwin (1905 – August, 1937), naming it Lord Tod Wadley. She became exceptionally attached to this doll, keeping it with her until her death, although—unlike Donald Campbell's mascot 'Mr. Whoppit'(and you all thought Monty Python was joking!) —she didn't take it into her speedboats for fear of losing it.  She had clothes made for it in Savile Row and had its name placed with her own on the name plaque on the door of her London apartment.


Between 1925 and 1930, Carstairs spent considerable time in powerboats and became a very successful racer, although the Harmsworth Trophy she longed for always eluded her. She did take the Duke of York's trophy and establish herself as the fastest woman on water. Intrigued by the hydrofoil designs of Alexander Graham Bell and Casey Baldwin in Nova Scotia, Carstairs ordered a 30-foot hydrofoil boat from the Bell Boatyard in Baddeck, Nova Scotia which was intended to achieve 115 mph and capture the Harmsworth Cup.


However circumstances caused her to withdraw and the boat was completed with a more economical engine delivering 57 mph. During this time, the North American press erroneously began referring to her as "Betty," a nickname she loathed; she claimed that journalists used it out of spite.


Carstairs was also known for her generosity to her friends. She was close to several male racing drivers and land speed record competitors, using her considerable wealth to assist them. She paid $10,000 of her money to fund the building of one of the Blue Bird land speed record cars for Sir Malcolm Campbell, who once described her as, "the greatest sportsman I know." She was equally generous to John Cobb, whose Railton Special was powered by the pair of engines from her powerboat Estelle V.


Meanwhile, Carstairs invested $40,000 purchasing the island of Whale Cay in the Bahamas where she lavishly hosted such guests as Marlena Dietrich and the Duke and Duchess of Windsor. (The island was is for sale now for $20 million). She not only constructed a Great House for herself and her guests, but also a lighthouse, school, church, and cannery. She later expanded these properties by also buying the additional islands of Bird Cay, Cat Cay, Devil's Cay, half of Hoffman's Cay and a tract of land on Andros.


After selling Whale Cay in 1975, Carstairs relocated to Miami, Florida.  Carstairs died in Naples, Florida, in 1993 at the age of 93. Lord Tod Wadley was cremated with her. Their ashes and those of Ruth Baldwin were buried by the sea near the Old Whaler's Church in Sag Harbor, New York, New York.