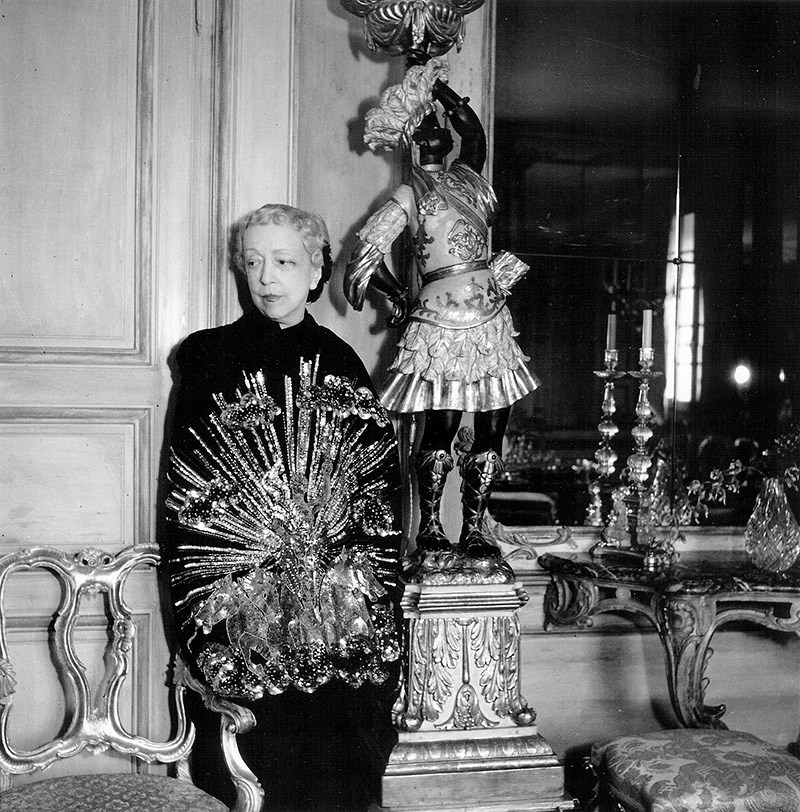 ELSIE DE WOLFE, American interior designer, born (d. 1904); was a pioneering professional interior decorator in the United States, nominal author of the influential 1913 book "The House in Good Taste," and a prominent figure in New York, Paris, and London society. During her married life, the press usually referred to her as Lady Mendl.


She is often credited with inventing the profession of interior decoration (she didn’t), with being an actress (not!) and madly in love with her husband, Sir Charles Mendl (nope.) In the 18th century, interior decoration was the purview of upholsterers (who sold fabrics and furniture) and architects (who employed a variety of craftsmen and artisans to complete interior design schemes for clients), while in the 19th century, the skills of designers such as Candace Wheeler and design firms such as Herter Brothers were well known. De Wolfe reaped an enormous amount of publicity and doubtless was the field's most famed practitioner in the early 1900s, a period that also saw an increase of interest in interior design in the popular press.


De Wolfe was, in the order of her claims, an interior decorator (probably among the first 10,000 or so, but hardly the first); a clotheshorse whose abilities as a thespian never quite equaled the Parisian gowns people paid good money to see her model on the New York stage, and the Lesbian lover of Elizabeth Marbury (Sir Charles, who didn’t like boys, didn’t mind his wife’s past at all.)With the help of Marbury, Elsie became decorator to the exceptionally wealthy.


Among her clients were Anne Vanderbilt, Anne Morgan, the Duke and Duchess of Windsor, and Adelaide and Henry Clay Frick. She transformed the design of wealthy homes from the dark Victorian style into designs featuring light, fresh colors and a reliance on 18th-century French furniture and reproductions. Her detractors, who thought little of her talents and less of her social climbing, simply called her “the chintz lady.” On first seeing the Parthenon, De Wolfe exclaimed "It's beige—my color!" At her house in France, the Villa Trianon, she had a dog cemetery in which every tombstone read "The one I loved the best."...